A downloadable game for Windows and Linux

Now with gamepad support and 2-player CO-OP play! Press ESCAPE to set up your gamepads for solo or coop play.

UPDATED: December 15, 2015 to version 0.6 with many bugfixes and improvements! NOTE: THIS IS A WORK-IN-PROGRESS. The core gameplay design is working, but needs refinement. Please feel free to play and offer your feedback/bug reports/ideas! send comments to me at dto@xelf.me, or you can give feedback and keep track of development in the 1x0ng DevLog on itch.io Community Forums.

1x0ng is an enhanced remake and re-envisioning of my 2009 puzzle game
"Xong" which simplifies some aspects of the original while adding a
few new features inspired by the later games in the series.

In the game of 1x0ng you are a tiny pixel-person running around in a
procedurally-generated 2D labyrinth infested by evil robots. Use the arrow keys (or numeric keypad) to move.

You must defeat all enemies and escape the maze. Blocking your way will be many breakable colored bricks. In addition, some areas are locked behind
colored gates. Press SHIFT to fire your bouncing Squareball to break bricks of various colors; you can only destroy gates of the corresponding
color if your Squareball has picked up that color from the last brick
it broke.

The Squareball only travels straight north, south, east, or west; you
cannot fire it diagonally.

You cannot harm enemies by shooting them with the Squareball, though
some types may be temporarily stunned by being hit. Instead, you must
kill the enemies by using special arrow icons called "Chevrons" to
propel them into the Black Holes. (Each black hole can swallow only
one enemy.)

Press SPACEBAR to drop a Chevron. You can deploy up to three Chevrons at a time, and when an enemy touches a Chevron it is propelled in the direction the arrow points. You can spin chevrons by hitting them with the Squareball.

Most black holes will be buried inside brick walls, or even behind
colored Gates. To win each level, you must unlock and/or dig various
tunnels to the black holes and arrange your chevrons to guide evil
robots to their doom, then rush for the exit once it opens!

Touching any enemy, bullet, or black hole causes instant
permadeath. There is no win condition and no highest level; the
challenge is to complete as many levels as you can. 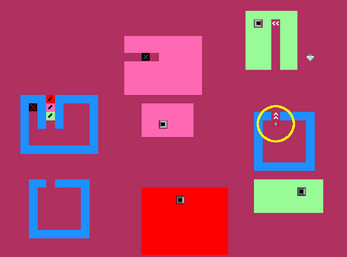